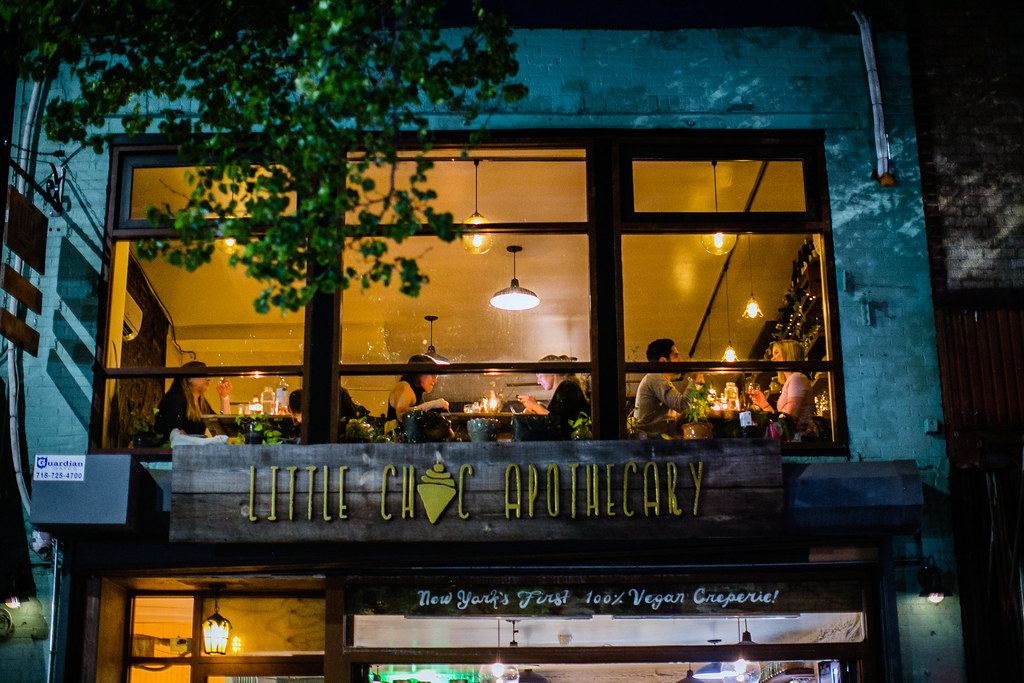 It happened. I did it. Last week I put on my first uprooted pop-up dinner. It was a six-course, spring-inspired menu, consisting of a handful of recipes that I’ve created over the years as well several that I crafted specifically for this event. The impetus was a moment of inspiration back in February: I could totally do this. I think this is what I want to do. Less than three months later, I made it happen.

The whole thing has felt surreal since the moment it ended and, despite still having a few straggling leftovers in the fridge, already feels like something I’m looking back at from several weeks away instead of several days.

The process of putting it together was as much personal as it was culinary or logistical—maybe more so. Once the date was set and it went from mere notion to very real thing that I’m about to do, I became filled with a sort of uneasy excitement. I remember walking home from the meeting I had with Julia—owner of Little Choc Apothecary, the venue that had agreed to host the dinner—where I’d gotten a quick tour of the kitchen and we’d decided on the date, feeling the giddy elation of holding a wonderful secret. It was real, but it wasn’t in the world just yet, which felt somewhat safe. Still, it was the sort of thing that depended on being cast into the light, on people knowing and showing up; this part was terrifying.

I should also mention that, around the same time I received a yes from Julia on the pop-up, I was contacted by the Gluten-Free Food Allergy Fest and invited to attend any of their locations as a featured blogger and do a cooking demo or presentation. I took the leap and said yes. After a very enthusiastic call and e-mail exchange with one of the organizers, I was officially booked to demo at the Brooklyn fest in July. (They’re stoked about the vegan angle!)

So, a lot happened all at once—things that I’d been wanting in some form or another for years. As excited as I was for all of it, it wasn’t long before the self-doubt and imposter syndrome set in. It’s a cruel dichotomy to feel all at once thrilled about and totally capable of doing what’s in front of you but also completely unworthy of doing it.

Still, I pushed forward. I had some early successes testing certain recipes and subsequent challenges with others. There was a sense that some dishes were incomplete and periods of uncertainty as to what they needed to make them whole. Plating was something I had to think about for the first time—I mean, beyond the occasional, neatly-splayed avocado atop a salad. I didn’t want the dishes or their presentation to be overly precious, but I still wanted things to be beautiful and feel special. 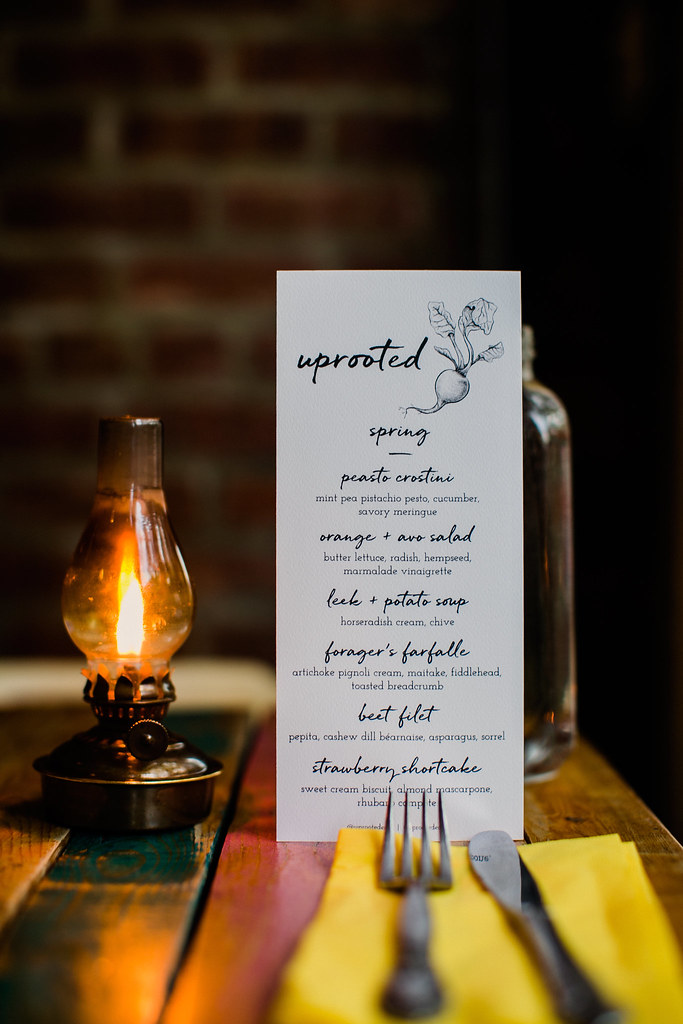 As the weeks wound down and as life kept happening (at times really happening) alongside the prep and thought I was putting into the event, my anxiety around it grew. I’d expected to have everything completely tested and sorted out, to have timelines and prep lists finalized, at least two weeks before the date. I’m detail-oriented. I’m a planner. It’s my thing.

Instead I felt like I was scrambling. The week before, I started to regret having made the decision to do it at all. What is wrong with me? Why did I think this was a good idea? I had set out with the intention that this would be the first of possibly many such events, but that potentiality was quickly waning under the shadow of my stress. I was committed to this one, though. People had bought tickets. This was officially a thing. I just had to get it done.

The day before the event, I was still creating and testing things and finalizing plating. By some strange miracle, that afternoon, everything clicked into place. The new elements worked. Timelines and prep lists flowed easily. Everything fit and felt complete.

I felt a sense of calm come over me, and, as the weight of the anxiety lifted, I was energized. This was going to happen and it was going to be okay.

At 11:30pm that night, I got an e-mail from Julia telling me that their oven was broken. It was supposed to be fixed the next day, but there was a small possibility that that wouldn’t happen. Oddly enough, I felt okay about it. I did some quick recalculating. If the tech didn’t show, we’d make it work.

But the next afternoon the tech did show. The oven got fixed. I packed everything up and made it on time, donned an apron, and got into the kitchen. 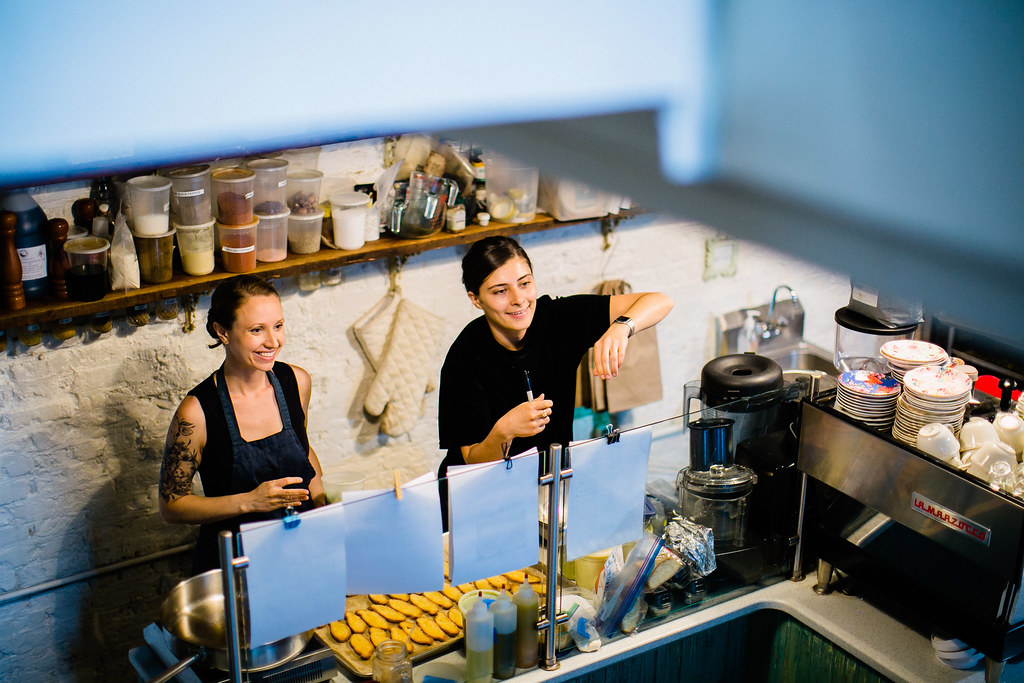 I’d been uncertain about how it would feel to work in an unfamiliar space, but, aside from having to figure out where everything was, I felt totally at home. I was more well-prepared than I expected, and the advance prep in the hours before people began to arrive moved at a comfortable, almost relaxed pace.

Julia and her staff were amazing and upbeat. The restaurant was filled with the kind of music that you couldn’t help but dance to and sing along with a little, so we did. My spirits were high and I felt totally in my element. Despite my worst imaginings, I didn’t collapse into a pile of nerves as people began to arrive. Instead the familiar (and unfamiliar!) faces that smiled past as they made their way upstairs to be seated bolstered my enthusiasm.

And then, it was time to get things going. 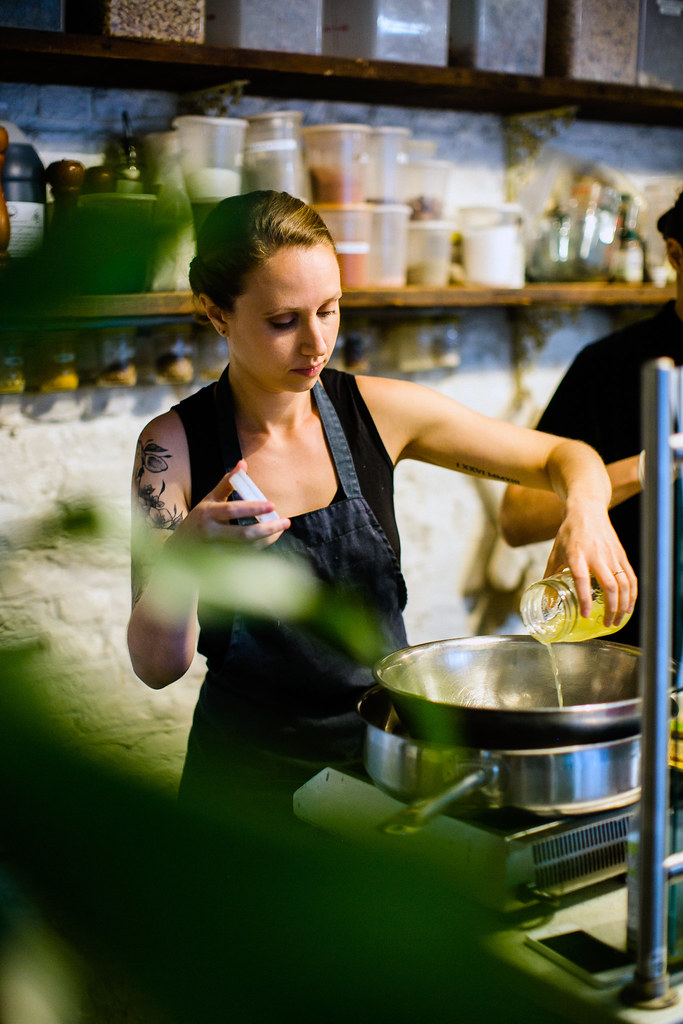 Sixteen white square plates were set out, and hands began to fly, placing pairs of peasto-slathered, cucumber-topped crostini. I came in, piping a dollop of salty, lemony aquafaba meringue atop (“acidic floof” is the very technical description I crafted in my head for the experience of a bite including this) and finishing each with a cheery yellow bok choy blossom. And then they went up and were gone.

The rest of the night went as such. A bit of heating/roasting/finishing in the background, with a regular flurry of placing, drizzling, dolloping, and sprinkling. After the plates would disappear, the staff would make quick, small plates of the remains for themselves. It was so fun to hear the immediate reviews. The crostini was described by one server as “unfolding” (unfolding!).

After the second course went up, a server came down and let me know that there was someone with a cashew allergy who was concerned about the beet filet (the menu specified that it was served with a cashew dill béarnaise). Cashews are a staple ingredient for me; I put them in pretty much everything. I did a quick mental inventory to assess if anything had already gone up that had cashews in it. Thankfully no. So what was left? The soup was next, and there was no way around that one. It would have to be out. The pasta was fine, the beet filet could be served without the béarnaise, and the strawberry shortcake would have to be an assemblage of the fillings since the biscuit was made with a homemade cashew heavy cream. We made it work.

Everything went quickly but smoothly. We’d gotten through the first five courses and were in the home stretch, getting ready to plate dessert. I started gathering the components: the strawberries that I’d lightly macerated, the rhubarb compote, the biscuits, the strawberry syrup, and the…. I paused. I checked everything again and turned to Julia, “Um, is there anywhere else where something might be?”

Somehow I’d forgotten the almond mascarpone. Just not brought it. It wasn’t there.

I had a moment of pause, but didn’t freak out. It was sort of the best thing I could have possibly forgotten. See, Little Choc makes this amazing coconut-based clotted cream that they serve with their scones and as a filling for their crepes, so we swapped that in. It worked wonderfully.

As we were plating up the shortcakes, I laughed and remarked that I was sort of glad it happened. Things were moving along a little too neatly for my first one of these; it needed a flub.

The shortcakes started to go up. I grabbed the last two plates and carried them upstairs where I was met with a humbling though greatly appreciated round of applause. I said a few words, which mostly amounted to: thank you for taking on chance on me. I’m still so grateful and in awe that everyone in that place did, from Julia to each of the sixteen people in those seats. 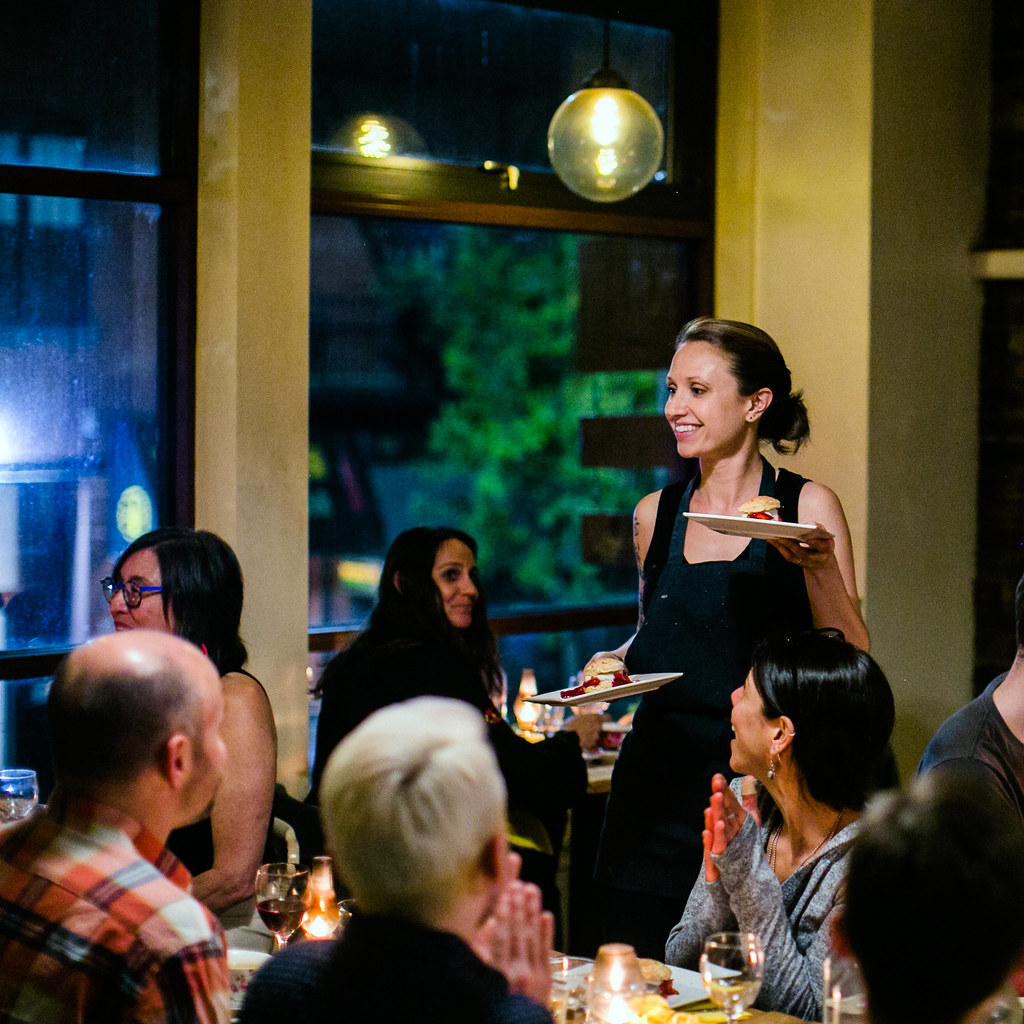 I went back downstairs, enjoyed a couple quick shortcakes with the staff (one of whom described it as a “strawberry dream”), and began to clean up. As people finished and began to filter out, I popped out to hug those whom I knew and shook hands with a few of those whom I was meeting for the first time.

It was such a fast, fun, whirlwind of an evening. I left feeling elated. I did it. It worked. And, most importantly, people enjoyed it!

In the days since, I’ve been asked several times when the next one will be. I’m not yet sure, but I can’t imagine not doing it again. Or something like it. We’ll see what’s next.

P.S. I will do a separate post featuring all of the actual food. 😉

All photography above by Melissa Robin.