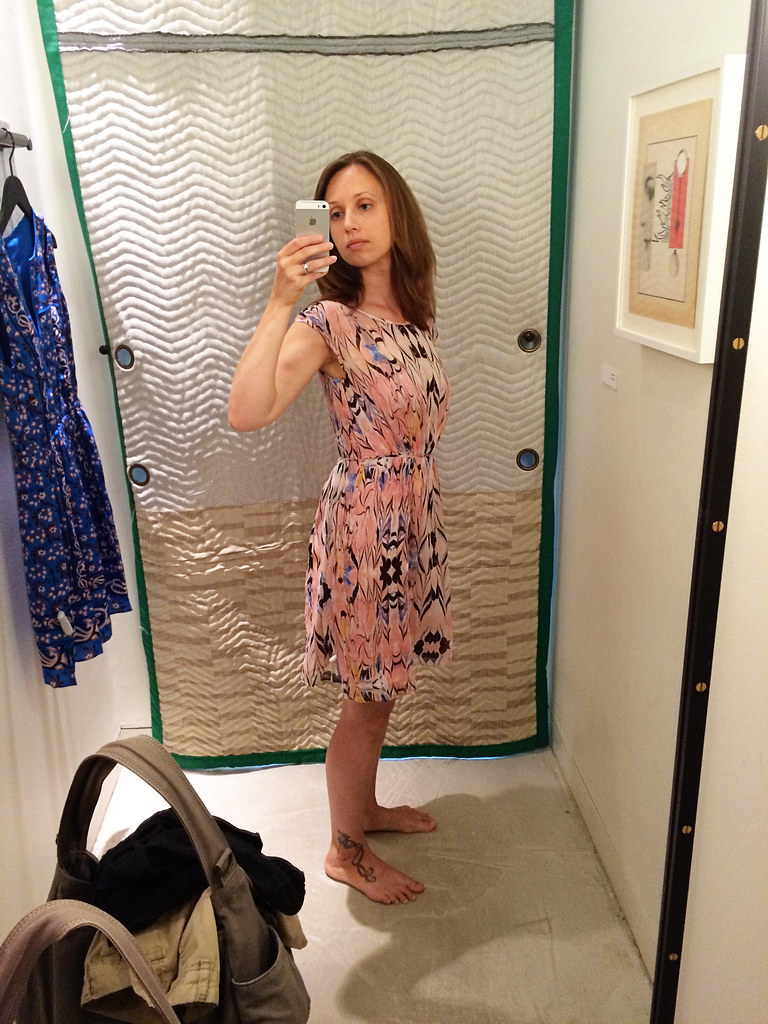 About this time last summer I found myself staring down a calendar filled with events—a bridal shower, wedding, bachelorette party, etc—that would require a certain level of dress, while simultaneously staring into a closet that was sorely lacking in appropriate garments. Clearly it was time to go shopping.

I’m not personally one for shopping (unless it’s for groceries!). I go when I need something specific and make every attempt to get in and out as quickly as possible. This made it especially disappointing when, after hitting several stores, I couldn’t find anything worth bringing home.

I waited a few days and made a last ditch trip one morning while Roman was at preschool. Happily and rather easily, I found a couple items that I actually liked! As it was nearing time to go get the kiddo, I made one final pass through the store, just in case. There was this crepey, patterned pink dress that I initially dismissed as being “too crazy”, but I was feeling optimistic after having found a couple nice pieces and decided to try it on. It looked surprisingly good. I texted a picture to the hubby to confirm. “I like it!” he said. I tossed it over my arm along with the other items I’d selected, checked out, and rushed off to pick up Roman. 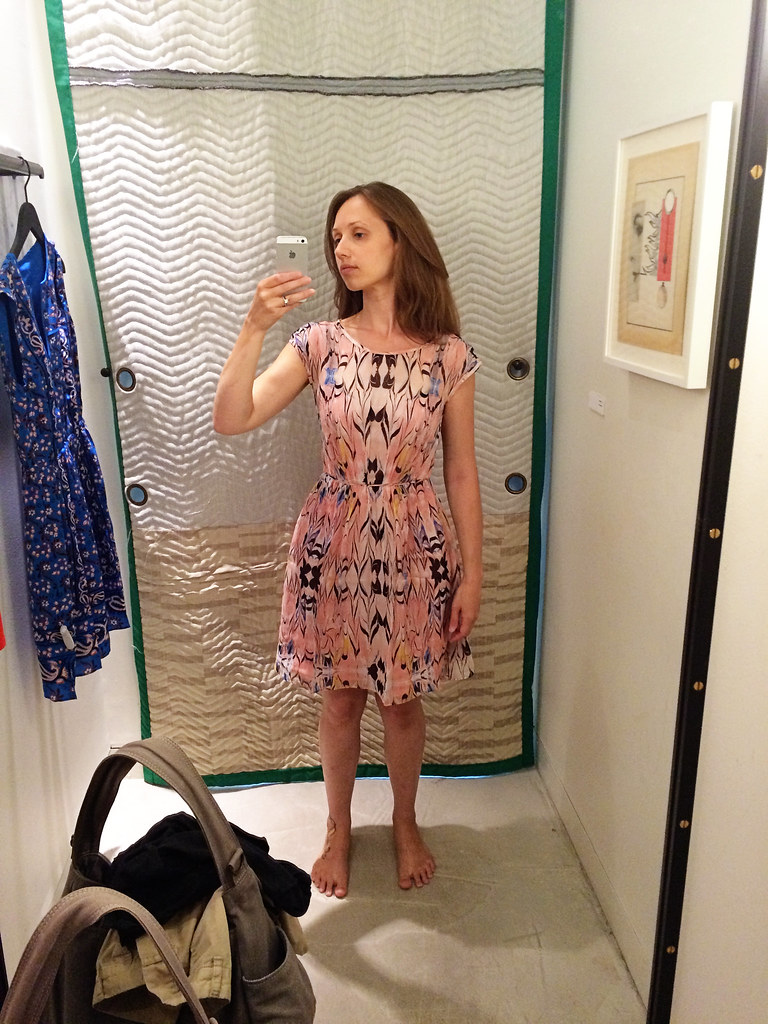 It wasn’t until I had the dress home and hanging in my closet, wondering what its cleaning instructions were, that I even thought to check the tag. This is something I’m generally pretty good about doing. I find a piece that I like, and, particularly if the material isn’t immediately identifiable to me, I check the tag before I even try it on. Cotton or synthetics? Go. Wool or silk? No. After my recent string of misses, however, I’d been so desperate to get out with something, not to mention bumping up against preschool pick up time, that I completely forgot to check the pink dress.

Naturally, it was silk*.

A queasy pang of guilt spread inside of me, despite it having been an accident, an honest mistake. I hadn’t yet worn it, the tags were still on, and it could easily be returned. But the creeping guilt wasn’t over the fact that I had purchased the dress, it came from somewhere else, from this tiny notion inside of me that maybe I would keep it. Because it had been unintentional, because it could easily pass as polyester, because nobody would ever really know, maybe I could wear it anyway.

I didn’t make a decision then. I left the tags on and left it hanging in my closet. I had the aforementioned bridal shower and the Main Street Vegan Academy coming up; my days were going to be too packed to worry about returning a dress. I would have to deal with it later.

My sister in-law’s bridal shower was warm and heartfelt (my dress for the occasion was cotton) and, a little over a week later, I was sitting in my last class of the Academy, steeped in information and inspiration, listening to Joshua Katcher (founder of The Discerning Brute and Brave GentleMan) talk about veganism and fashion. It was a hard presentation to stomach for all the usual reasons; whenever you look closely at the many ways that humans use animals, the truths you find are heartbreaking. But moments of this presentation left me squeamish for yet another reason: the silk dress waiting in my closet at home.

In his talk, Joshua discussed what he called “aesthetic irrationality,” the notion that aesthetics can be considered independently of or removed from morality. If it looks good, then it must be okay to wear. This is the fashion equivalent of “If it tastes good, then it’s okay to eat.” My guilt flared.

In my pre-vegan days, when I had come to an awareness about the intensive and horrific ways that animals were raised for food yet was still consuming them, I made an effort to buy animal products with conscience-appeasing labels: free-range, organic, humane certified, local. Like most people who go the “happy meat” route, however, I never fully grasped how little these labels meant for the animals themselves. Furthermore, I still ordered meat and dairy at restaurants and consumed baked goods containing animal products—without any sort of extensive detective work into how those animals were raised and whether the eggs and milk in my dessert were pastured/grass-fed/etc.

There were times when I felt conflicted about this, when the complicity in a system of innate cruelty would prick at my conscience and I’d find myself stuffing those feelings back down. I distinctly remember an occasion ordering Chinese takeout, when I really wanted to add chicken to my order of steamed vegetables, but felt horrible about doing so because I knew the poor bird would have been industrially-raised. I did it anyway. It’s just this one time…what does it really matter…nobody will even know…I buy the expensive, pasture-raised stuff too so at least I’m making an effort….

The not-so-hidden subtext: If it’s what I want, if it makes me happy, if it feels easier, then it is magically absolved of any real moral consideration.

Temporary and unnecessary gustatory pleasure, aesthetic appeal, or sheer convenience is never more important than the suffering and lives of sentient, feeling beings. When we live in a world with so much choice, when we have the ability to choose clothing, food, and other products that weren’t created off the backs of animals, choosing those that were makes the statement that suffering is acceptable and life is expendable. As well as we could ever possibly treat an animal used for food or fashion, the fact remains that an individual is still being used—unnecessarily—for interests other than their own. You can be the kindest slave owner, but that doesn’t make it morally acceptable to own slaves.

I was culpable and I knew it. To leave that dress hanging in my closet was no more innocent a choice than the chicken I had once guiltily added to my steamed veggies. It didn’t matter if it looked good. It didn’t matter if nobody would know. I’d know. Since going vegan, I’d found relief in no longer having to explain why it was okay for someone to die for my enjoyment, to have to investigate and assert all the small details of the ways they lived and were killed in some effort to make it okay. Why would I go back to that now? For a dress? There were more dresses in the world.

The next day I folded the crepey pink chiffon into a bag and brought it back to the store. I handed it over at the register. “I didn’t realize this was silk when I purchased it,” I said. “I’m vegan, and I don’t feel comfortable keeping it.”

*I used to think that avoiding things like honey, wool, and silk was more about being consistent in the vegan message of not using animals than about avoiding contributing to real harms. I’ve since learned that this is decidedly not the case. For those wondering why silk isn’t vegan, here’s the nutshell description of how it is acquired: When silkworms mature, they spin themselves into a cocoon made of silken thread to undergo the process of becoming a moth. Like other moths/butterflies, they chew their way out of the cocoon once their transformation is complete. This chewing, however, breaks up the silk threads, which in turn makes it less desirable to silk producers. To keep the threads intact, silkworms are boiled alive after spinning their cocoons. This releases the threads in longer, more valuable pieces, but is obviously a horrific end for the poor moths-to-be.