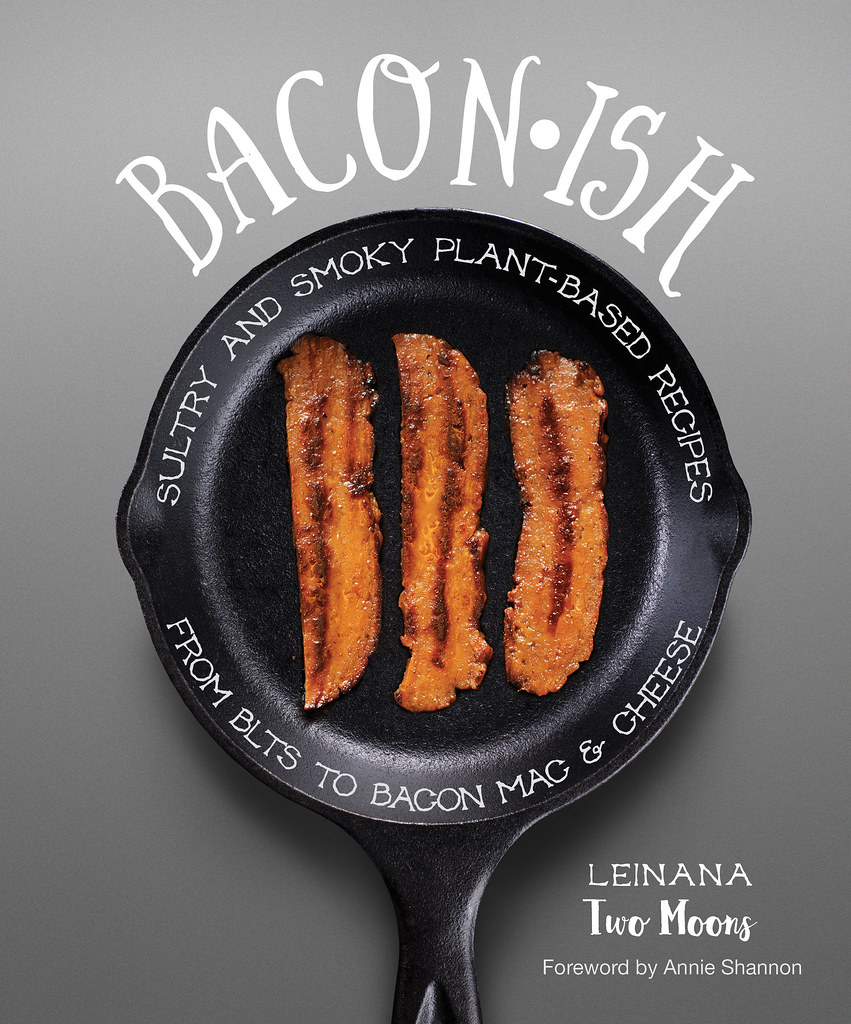 Years ago, I, like so many hipsters people today, possessed a deep love of bacon. It never reached the level to where I found myself applying bacon-flavored lip balm while wearing a bacon bikini (for your own sake please don’t google this), but I do recall once drafting a blog post professing my love for it. I can happily—and with great retrospective relief—say that I never pressed publish on that one, but the point is that I get it. I get the obsession, and I get why it’s one of the most common hangups of the non-vegan.

As I approach nearly five years of veganism, and as a former aficionado of bacon of the porcine variety, I can tell you two things:

You know what makes bacon so tasty? It’s the smokiness, the saltiness, the subtle sweetness, and the crispiness of it. It’s the sensory-igniting combination of all of these wonderful things at the very same time. That’s why so many people love bacon, and why I love it too.

Love? What’s this present-tense love of which I speak? 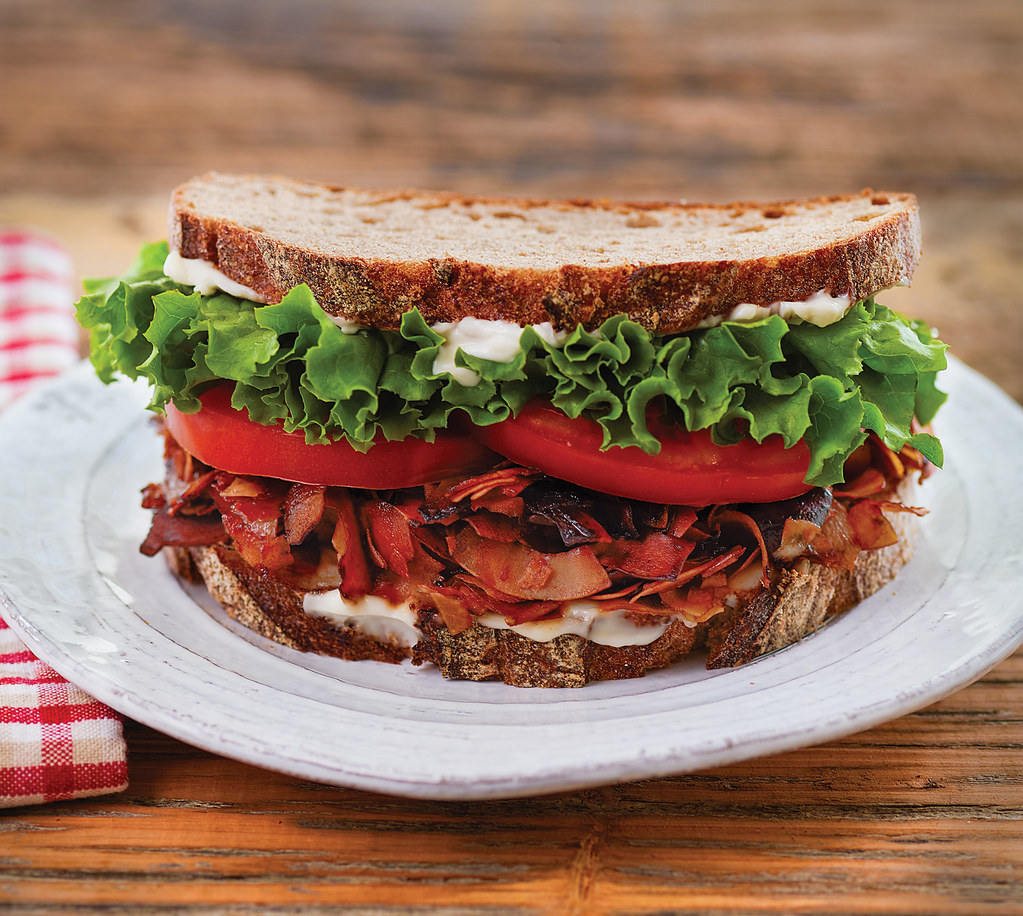 Like so many other things (Okay basically everything. You know there’s a plant-based burger that bleeds now, right?), there is a vegan and cruelty-free way to satisfy your bacon cravings. Make that more than 10 ways to satisfy your cravings.

Leinana Two Moons’ debut cookbook Baconish is a sinless celebration of all the many animal-free ways you can enjoy bacon—and then some. Not only has she crafted ten separate recipes for vegan bacon, utilizing everything from tofu to seitan to eggplant to carrots, but she also includes pig-free variations on things like pulled pork and pineapple-glazed ham. If that weren’t enough, she then goes on to offer a full, honest-to-goodness cookbook’s worth of recipes featuring all the different varieties of vegan bacon, from breakfast straight on through to dessert.

To give you a taste, here are a just a few of the many jaw-droppers: Quiche Lorraine, Maple-Bacon Doughnuts, Loaded Potato Soup with Bacon, Black Bean Barbecue Bacon Cheeseburgers, Cauliflower Bacon Gratin, Butternut Squash Carbonara with Bacon and Sage, Elvis Cupcakes (banana cupcakes with peanut butter frosting sprinkled with coconut bacon!!!), and a Miss Piggy Strawberry Ice Cream made with aquafaba (what??) that does not require an ice cream maker.

Are you drooling yet? I am. 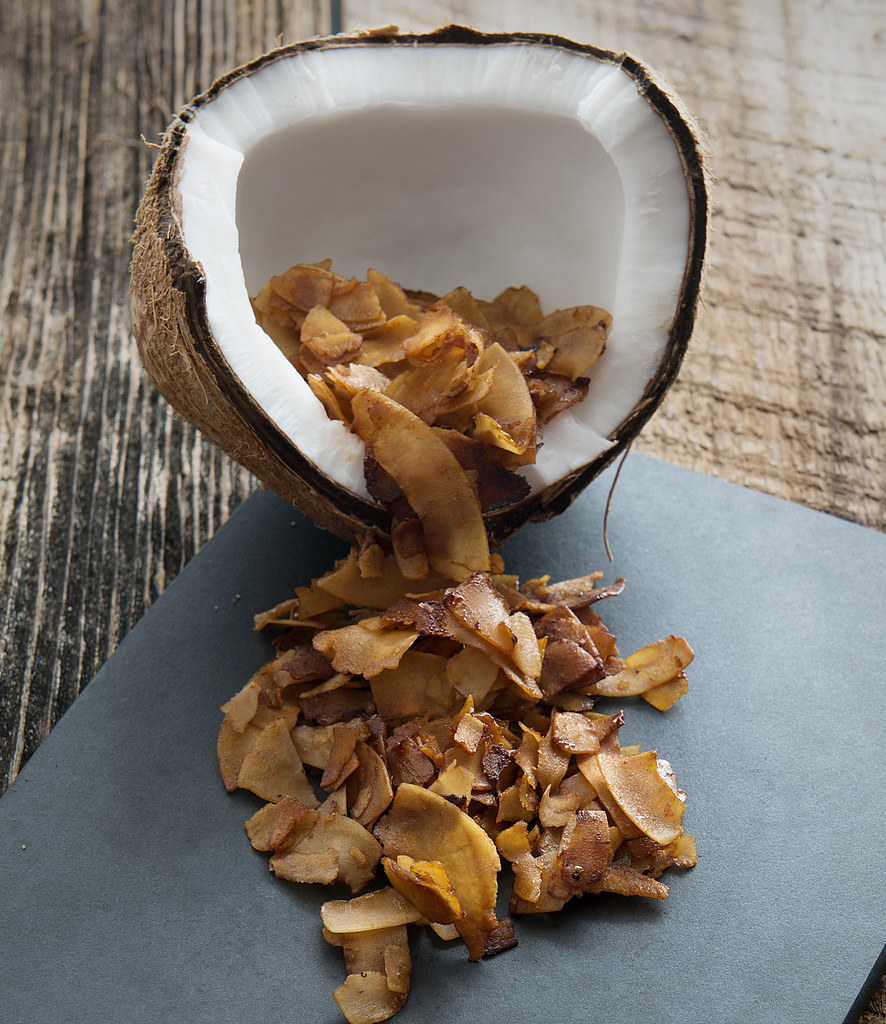 Full disclosure, I was excited for this book before I ever got my hands on it not because of my past life love of bacon. I was thrilled because I’m fortunate enough to call Leinana a friend. She is one of the warmest, sweetest people I know, one of those people who makes you feel loved from the very moment you meet her. The book could have been so-so and I still would have been jazzed about it. Luckily, and not at all unexpectedly, it’s a fabulous book. I have paged through it cover to cover multiple times and each time I find new things that I can’t wait to make.

The very first thing I checked off my Official Baconish To-Do List was Leinana’s coconut bacon. If you haven’t had coconut bacon yet, get on it. The coconut takes on that classic salty/smoky combo via a marinade of tamari and liquid smoke. It crisps up gorgeously in the oven and, because it’s choc full of plant-based fats, has a luscious, almost melting quality. I stood in front of the baking sheet after pulling it from the oven and literally had to put my hand out, palm forward, and tell myself out loud to stop or I would have eaten it all. 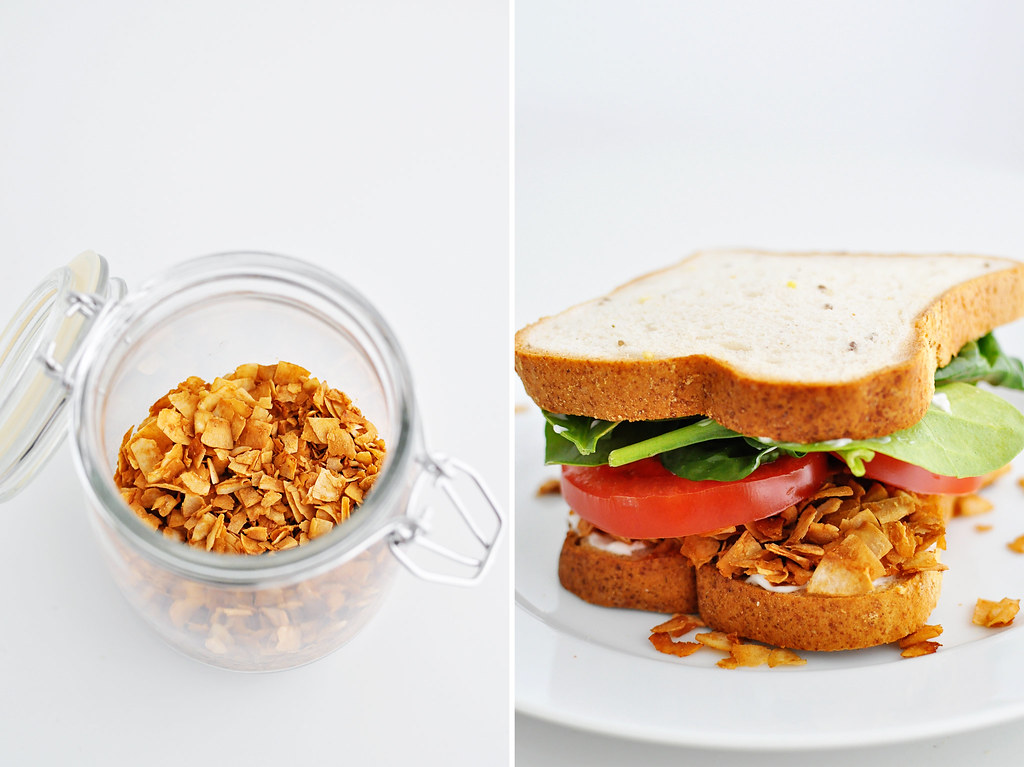 In addition to sneaking pinches straight from the jar, I’ve since piled this coconut bacon on burgers, mac and cheese, sprinkled it over salads, and used it to create Leinana’s awesome coconut BLT. It’s one of those things that you’ll find yourself compulsively trying to find an excuse to eat more of. Actual thoughts that I had: Could I put it on fruit? It’s too crazy to put it on yogurt, right?

Since it is that good, and since I want you to share in the same joy that I now know, I’m happy to tell you that you can find the recipes for Leinana’s coconut bacon and the BLT below (shared with permission). Once you’ve made the bacon, please know that you have a safe space here to openly discuss any of the potentially embarrassing ways in which you’ve shamelessly devoured it. Me too, friend. Me too.

And because it is a question that I’m inevitably asked any time I make mention of vegan bacon, I’ll take a moment to address it: Does it taste the same as traditional bacon? Well, I haven’t tried all the variations yet (tofu bacon is marinating in the fridge presently!), nor have I had any of the gluten-ful pre-packaged types, but I think the honest answer is no. Not exactly the same. But so what? Look at it this way—you can hold onto having one specific type of bacon (two if you count the kind that’s made from a turkey) simply because it’s what you know and despite the fact that it causes harm to smart, soulful beings, OR you can open yourself up to 10+ types of bacon, to new possibilities and a variety of textures and applications, all cruelty-free and with comparable flavor notes to what made the original appealing in the first place.

I meant it when I said that I don’t miss bacon—and with an entire book full of awesome baconish recipes, I’ll never ever have to. Neither will you.

P.S. For additional sneak peek recipes and more chances to win your own copy, make sure to swing by the other stops on the Baconish blog tour.