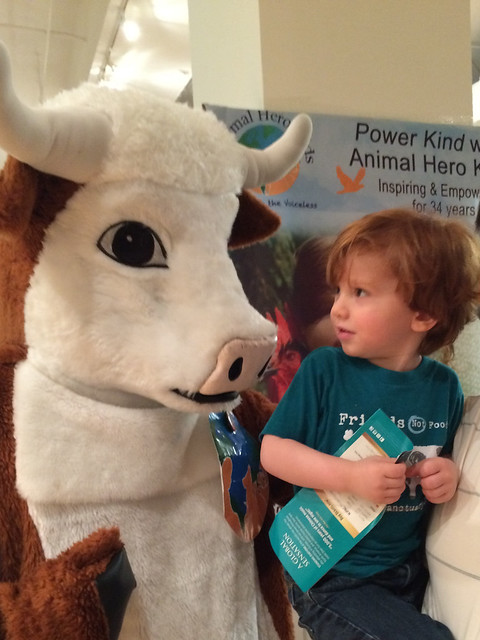 First things first—who else has been enjoying the warm weather these past couple weeks? There were a couple chilly/rainy days just recently, but it’s been so uplifting to have some sun and to be rid of the snow (at least for now…hopefully until next winter). We’ve been getting out, taking long walks, going to the playground again. Spring is right around the corner, and, after this beast of a winter we’ve had, the change of seasons honestly feels like optimism.

Despite yesterday being one of those aforementioned rainy ones, we got ourselves out of the house and headed over to the NYC Vegetarian Food Festival. It was packed and there were epic lines for many of the local favorites that we were hoping to hit, namely Yeah Dawg and Marty’s. We were a little bummed to have to skip them, but also thrilled to see that there was such demand for their awesome food. Luckily, we were able to snag some tofu taquitos, carrot cake, and a brownie from GustOrganics without a wait. GustOrganics is the only 100% organic certified restaurant in the city, and they’ve been slowly moving their menu in the plant-based direction over the last couple years with intentions to go fully vegan. Their desserts are all gluten-free and the two we tried were fantastic.

As we made our way through, we sampled some of Gardein’s gluten-free beefless crumbles—a gamble because neither one of us is crazy about meat analogues, Chris especially—and we were surprised to find that we both enjoyed them. Follow Your Heart was there as well, sampling some of their new block cheeses, and I have to say I was really impressed. The texture seemed spot-on to me from what I can remember and the flavors were great. They come in American, mozzarella, provolone, and garden herb varieties–all of which are gluten- and soy-free and will be offered in slices as well. This is one vegan cheese that I would dare to say might even fool an omni!

We also scored a giant bag of dulse from VitaminSea Seaweed at a killer price.  The guy manning the table was shocked that a two-year-old was so psyched about snacking it straight from the bag—like mother, like son! Roman then got to high-five a cow in the kid’s area while I chatted up the folks from the Solutionary School; I am so excited about these guys and their mission to educate and enable our children to create good in the world. I can’t wait to see what they do. Before we left, we grabbed a roll from Beyond Sushi, which we quickly chowed down in the stroller parking area before heading out. 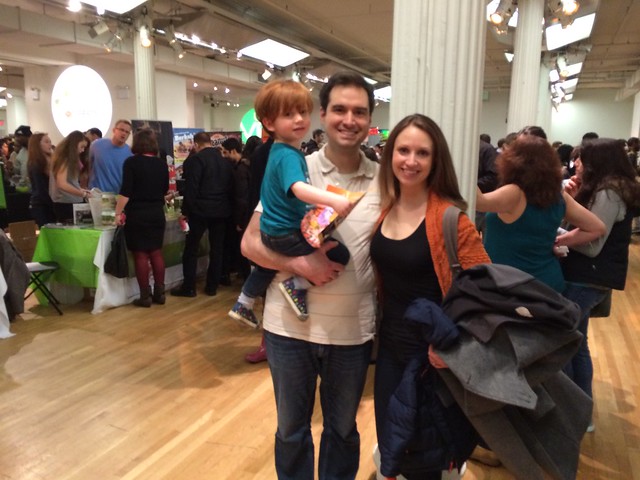 (The closest we came to getting a good family shot. We either weren’t all looking at the camera, one or more of us looked completely crazy, or the photo was blurry. Blurry it is!)

The Veg Food Fest was insane and kind of challenging to navigate with a kiddo in tow, but we’re glad we went. It was fun to sample some new things, engage face-to-face with organizations working for positive change, and to be immersed in veg community for an afternoon.

Afterward, we went out for dinner at Peacefood Café. I always forget that they don’t have a huge selection of gluten-free dinner options, but that’s because the food is really good and the desserts are amazing (and half or more are GF). Their cheesecakes are seriously out of this world. I got a slice of the “plain” one this time (plain = drenched in strawberry jam, naturally) and it honestly might have been the best cheesecake I’ve ever had. I remember swooning over the peanut butter cheesecake the last time we went as well.

Sorry there aren’t more pics of the details from this day. I’m still figuring out how to make all that happen while mom-ing. Truth be told, checking our coats probably would have helped a ton in this department. I mean, look at that armload—what was I thinking?

I also have a bunch of links that I want to share with you guys today. A fair amount of these are videos, but they’re all pretty short. Enjoy!

Dessert May Never Be the Same: Meet the Un-FOUR-gettable Flavors of Daiya Cheezecake
Speaking of new and fabulous food items and cheesecake: Daiya Cheezecake. The Natural Products Expo West happened last weekend and vegan social media was all aflutter over Daiya’s new dessert creation, which should already be in or coming soon to a Whole Foods near you. I heard only positive reviews and can’t wait to try it for myself. Also coming soon from Daiya: mac and cheese and Greek yogurt! Like all of their existing products, these newbies will be gluten- and soy-free. You’re running out of excuses, people! 😉

Woodstock Farm Sanctuary: Our Biggest News Ever
In addition to the burst of optimism I’m feeling as we head toward spring, this announcement from Woodstock Farm Sanctuary has me positively floating. We were told last fall that this would likely be coming, but it was so exciting to see the announcement: Woodstock will be moving to a new, bigger location that will also be closer to the city. On a totally selfish note, this means it will be easier for us to visit them and we can do so more often, which yay! But the bigger reason that this is so exciting is that they’ll have the space and facilities to rescue and care for even more animals. The property is stunning and I highly encourage you to watch their video, which gives a full visual tour of all the incredible plans they have for it. (It seriously gives me chills!) And if you’re able, please consider making a donation to help make this move happen. More people will be reached and so many more lives will be saved as a result.

He Didn’t Speak for An Entire YEAR – For the Animals | James Aspey
I loved this interview from Emily at Bite Size Vegan with James Aspey, who, as the title makes clear, didn’t speak for 365 days in an effort to bring awareness to animal suffering. I especially loved the part of the interview in which he talks about his journey to veganism; so much of it felt familiar to me, and, while the details were certainly different, echoed my own progression from it being based in something self-centric to being a process of discovery, leading to a reevaluation of my values and worldview, and ultimately being based in something larger than/outside of myself. I imagine this resonates with a lot of vegans. The whole interview is great, though. James is highly watchable, well-spoken, and conveys the ideas he’s sharing in a very relatable, easy-to-grasp manner.

If Vegans Said the Stuff Meat-Eaters Say
This hilarious role-reversal from PETA shows what the conversation would look like if vegans lobbed the same nonsensical questions and arguments at meat-eaters that they use with vegans. It’s pretty awesome.

Fish (Not Just Fido) Are Smart, Feel Pain
This thoughtful piece by James McWilliams takes a look at the evidence for fish sentience.  He explores how their experiences are often overlooked or dismissed entirely simply because we see these individuals as being so vastly different from us that we fail to make the connection.

Plant-Based Workplace Intervention
Geico recently encouraged some of its employees to adopt a plant-based diet, with really positive results. This video from Dr. Michael Greger also mentions that part of the success that some of the employees may have seen, particularly in terms of weight loss, could have been because people on plant-based diets may have a tendency to burn more calories. (Anecdotal aside: this has certainly been true for me!)

Do Vegetarians Get Enough Protein?
Another good one from Dr. Greger, in written article form with a video option. The punchline: We really should be asking omnis, Where do you get your fiber?

« Love All Life
How to Freeze Bananas for Smoothies »