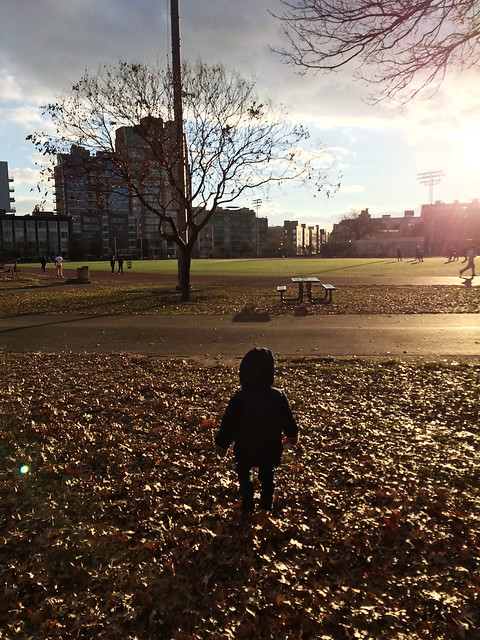 Hello all! I know I’ve been woefully absent after my month of daily posting, but maybe we can average it all out and pick up from here? This of course means that I’ve been posting roughly every other day for the last two months, which isn’t so bad if I do say so myself. 😉

I hope you all are enjoying a wonderful holiday season! So far, we had a really nice, low-key Christmas Eve celebration at our home with Chris’ parents. The edible spread featured a cheese plate from the fabulous Dr. Cow and vegan versions of some of my grandma’s holiday classics: creamy wild rice soup and luscious risalamande (Danish rice pudding).

After Roman tore into all of his presents the next morning, we headed up to Westchester for the big family celebration. There was a killer vegan bean dip put together by Chris’ cousin Ava, a bloomy Kite Hill almond brie with cranberry sauce (holy crap was that good!), a hearty lentil shepherd’s pie via Aunt Janine, and vegan eggplant parm made by my sister-in-law Amy. Feeling full yet? There was also dessert! Pizzelles, cookies, and pumpkin upside down cake—all vegan and gluten-free. And as amazing as all of the food was, the company was even better.

We’re looking forward to ringing in the New Year tomorrow with Chris’ family as well. There may or may not definitely be Buffalo Chickpea Dip involved.

I’ll be back early in the new year with a list of some goals that I’ve been thinking about for 2015. I’m not one of those anti-resolution people or anything, they’ve just been swirling about my head more as “goals” than “resolutions,” so that’s what I’m going with.

And speaking of goals/resolutions: for any of you who have been thinking about giving a plant-based diet a test drive, wanting to lighten your environmental footprint, feeling disheartened about animal suffering, or maybe just itching to challenge yourself to try something new, there’s this great thing happening next month called Veganuary. Basically, Veganuary is an opportunity for non-vegans to take a one-month vegan pledge for the month of January. And the best part is that the minds behind Veganuary will be there to hold your hand the whole way! Their website is brimming with resources and tips, some hardcore myth busting, and tons of information about the benefits of a vegan lifestyle. Plus, they’re super active on Twitter and the vegan community is really stepping up to the plate to support participants as well. Why not give it a go? I’d love to hear if you’ll be taking on this challenge and will be happy to provide any support that I can.

A very Happy New Year to all of you! I hope your holiday season has been filled with love, joy, and compassion that carries all the way through the next year. See you in 2015!