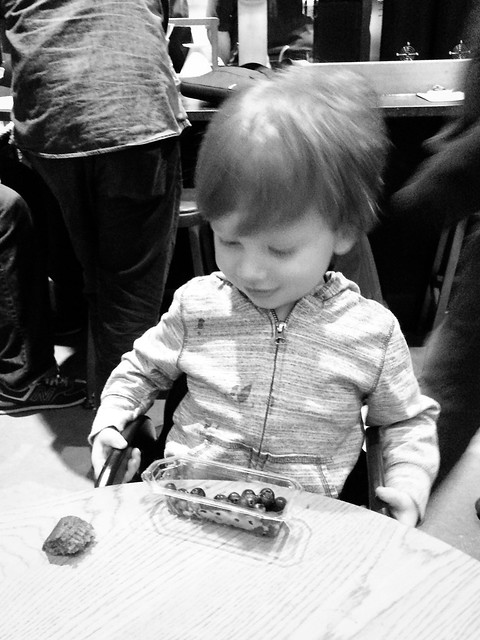 This week I decided to take my little man out for an afternoon coffee date at the new Starbucks in our neighborhood.  We swung by Juice Generation first to grab a couple of gluten-free, vegan pumpkin muffins, since, despite their efforts to fit in with the neighborhood aesthetically, Starbucks’ baked goods selection still lacks these options.  When we arrived, I snagged a cute little container of blueberries in case Roman wanted something in addition to his muffin and ordered a soy chai for myself and some steamed soy milk for my date.  We pulled a high chair up to a small, round table for two and enjoyed our afternoon snack.

After finishing off his muffin, Roman fed me his entire container of blueberries and then began to eavesdrop on the two men talking behind him.  Every time they laughed, he let out a loud, fake guffaw in response.  Shushing him only made him do it louder, which made me laugh too.  I was clearly not going to be effective in deterring this behavior, so I pulled out a book to bring our attention back to our little table.  After reading it for about the sixth time, Roman looked up and said “Ah-geh?”  I suggested that we go out for a walk instead, before it got too dark.

We packed up and headed to the park.  Roman began his usual stick/leaf/rock/acorn-collecting, but was soon distracted by a little boy kicking a ball.  They kicked it back and forth a few times before the boy sent it rolling down the path and ran after it, Roman running after him.  The boy continued on this way, kicking his ball and running to catch it, only to kick it again, and we made our way through the rest of the park, chasing after the little boy chasing after his ball. 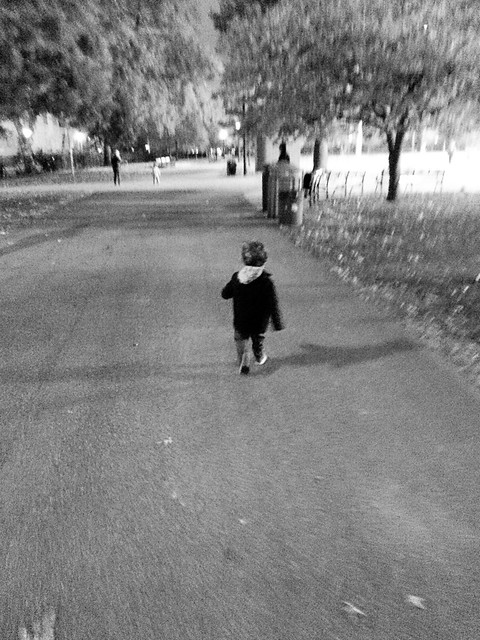 We’ve been having a lot of days like this lately.  I think part of it is because of where Roman is at now, but part of it is definitely me.  Knock on wood, but I feel like I have my head above water for the first time in a long while, and I’m pretty sure it has a lot to do with being here every day.  I’ll be meditating on this more through the rest of the month and will share more thoughts as it comes to an end.  Right now I’m enjoying the unexpected freedom that I’ve found in this daily commitment and the carefree time it’s giving me with my son.