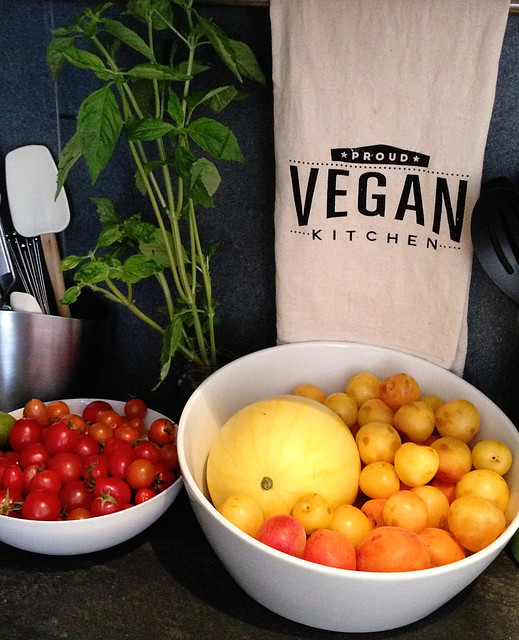 We live in a nice, cozy vegan bubble here in Brooklyn. All four members of our little family (dog included) are vegan. There are restaurants (plural) that have entirely vegan menus within walking and delivery range. On top of that, there are dozens of non-veg restaurants that offer vegan menu items and basically every grocery store in the neighborhood stocks at least one vegan version of pretty much anything you could want—including some amazing, locally-produced vegan ice cream. We are even walkable to a vegan cheese shop and a vegan clothing store.

In northern Wisconsin, amid the dairy farms, there are billboards for beef.

During our stay we were surprised to find that the massive grocery store across the street from our hotel in St. Croix Falls had two aisles and a freezer case stocked with gluten-free and vegan products. Still, the Field Roast sausages sat one shelf above packages of organic ground beef and nearly one fifth of the store, the whole back side running lengthwise, was dedicated to animal flesh.

Mealtime conversations were jarring. Chris has noticed this at work dinners, but we’ve been playing host this summer to friends and family, so it’s been a while since I’ve eaten in a setting where not everyone’s plate is filled with plants. So much of the discussion ends up coming back to food, which, when you’re morally opposed to what your dining companions are eating, makes just being there difficult. We can avert our eyes, but inevitably someone comments on how juicy this piece of animal flesh is, how delicious that cheese tastes, while yet another asks “How would you like your eggs?” It becomes a game of sensory selection, attempting to see and hear around the things that make you cringe.

And then there are the jokes or the very direct conversations that people engage you in about the things they eat and prepare. It always astonishes me that we’re approached with these topics so casually and without consideration for the fact that we see these things as wrong. A joke about the animals that we choose not to eat is not the same thing as a joke about, say, gluten. The latter is something that someone may need to avoid for health reasons, and the former, while definitely associated with health concerns, is also the result of a lot of unnecessary suffering. It’s hard because you don’t want to be the preachy vegan when someone is genuinely aiming for a moment of levity (misguided as it may be), but you also can’t laugh at something that you know is so wrong. So we spent a fair amount of time deadpan, tongues held between our teeth, feeling our hearts sink into our stomachs.

It has also been very difficult to watch as family members on both sides begin to complain or receive diagnoses (or pre-diagnoses) of totally preventable, lifestyle-related conditions: diabetes, hypertension, diverticular disease, high cholesterol, excess body weight, joint pain, dementia, heart disease. It’s even more difficult to listen as they chalk these things up to getting older, as though these conditions and the medications that quell their symptoms are perfectly ordinary or beyond their control. Every time it happens, I want to whip out Forks Over Knives and start pulling up scientific articles. “No, see? These are all conditions that can be prevented, treated, and often reversed by adopting a plant-based diet!” I’ve yet to be in a situation where it’s the right time or place to actually do this, so we say what we can when it feels appropriate, but most of the time we walk away feeling pretty helpless.

After returning from our trip, I felt so much anxiety and so disheartened. It helped to simply be home and in our little vegan bubble once again, but I’ve also been trying to remind myself that there was once a time when I thought that veganism was extreme and unreasonable. There was a time when I said that I could never give up cheese or bacon, when I believed that there was such a thing as needing animal protein. I’ve been trying to remember that, even once I had learned enough that I could no longer ignore that a plant-based diet was the healthiest possible diet for humans to consume, even as I was feeling those benefits, it was hard to imagine never eating animal products again. And even as I felt my heart shifting, after accepting that there is no humane, conscionable way to eat flesh, milk, or eggs, I was still nervous about what labeling myself as vegan would mean for my identity.

Making the change was difficult and scary. It can be hard for me to remember this because living the change, coming out on the other side, is not. That’s what I feel like so many people don’t see, what I didn’t see before I got here—that actually being vegan isn’t hard. It’s liberating and joyful. It’s abundant.

And that that’s exactly why this trip was so challenging—because I have this hope inside me that, one day, everyone will come to see that being vegan isn’t about giving things up. It’s about kindness, compassion, and moving your actions in line with the values that you likely already have. It’s about vibrant health and longevity. It’s about hope for the future of our species and the earth. I shouldn’t have been so surprised that being a vegan among omnivores was trying; I have far too much hope to have come away unaffected.